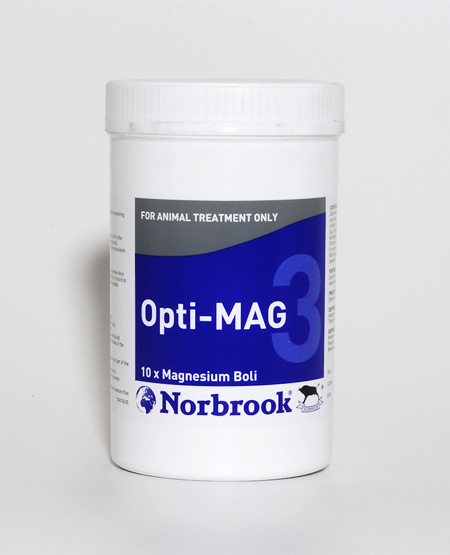 maintenance of magnesium intake during the high risk
periods associated with the grazing of rapidly growing grass,
by the provision of a slow release depot of magnesium.

Two Opti-Mag 3 boli should be given to each animal
two/three days before the expected period of risk e.g. before
transfer from indoors to grass in the spring. If necessary repeat
no later then four weeks.
1 bolus delivers 3g per day
2 boli deliver 6g per day
Only to be given to cattle at least 300kg bodyweight.
Administer orally by using the specially designed bolus gun.
Load the gun by inserting the bolus into the open end. Open
the animals mouth and the gun should then be introduced
carefully and gently until the bolus is in the region of the back of
the tongue. Severe pressure on the tongue should be avoided.
Depression of the plunger will deliver the bolus onto the rear part
of the tongue, thereby intiating a swallowing action. The gun
should then be carefully withdrawn from the mouth. A second
bolus should then be administered following the same procedure.
Observe each animal for a short time after administration to
ensure the boli have not been regurgitated.

Opti-Mag 3 boli are recommended for the use in adult cattle
only, when grazing rapidly growing grass within a well-defined
period of high risk.
Consumption of more than small amounts of other feeds (e.g.
hay, silage, concentrates) may, by altering the pattern of rumen
fermentation, change the rate of release of magnesium from
the boli. The bolus may more readily reach the reticulum or
base of the rumen if it is not given immediately after the
feeding of hay or silage.
Opti-Mag 3 may occasionally be regurgitated. If it is noted that
an individual animal had regurgitated a bolus, administration
should be repeated.

Store in a dry place.

Each Opti-Mag 3 boli contains 100g Magnesium with a slow
magnesium release mechanism.
This is approved as a non-medicinal product.
For Animal Treatment Only.
Keep out of reach and sight of children.